Click the Author/Title links to see where the item is availabler right now!

JE – Picture Books
Andreae,Giles – Dinosaurs galore! – A dozen different dinosaurs introduce themselves in funny, rhyming verses.
Blumenthal, Nancy (Counting) – Count-a-saurus – This book shows groups of prehistoric creatures, from one Stegosaurus in the sun
to ten Hadrosaurids with hats.
DiPucchio, Kelly – Dinosnores – Relates the earth changing consequences of millions of nights of raucous snoring by sleeping
dinosaurs.
Garland, Michael – Miss Smith Reads Again – In her out-of-the-ordinary reading class, Miss Smith uses her incredible storybook to
transport her students to Arthur Conan Doyle’s “The Lost World,” where they have an adventure with dinosaurs.
Grambling, Lois G. – Can I Have a Stegosaurus, Mom? Can I? Please? – A child describes all the possible advantages of having a
Stegosaurus for a pet. (S)
Lewis, Kevin – Dinosaur Dinosaur – A rhyming story about a busy day in the life of a young dinosaur. 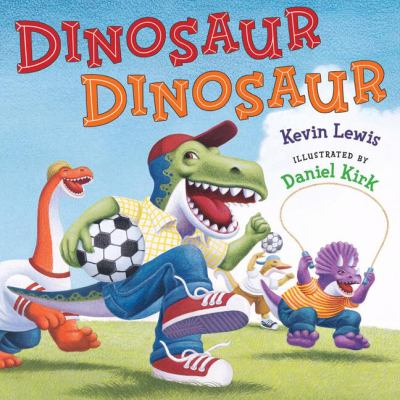 Mitton, Tony – Dinosaurumpus! – A rhyming tale of Triceratops, Brontosaurus, and even Tyrannosaurus gathering at the swamp to
dance.
Oram, Hiawyn – A Boy Wants a Dinosaur – Alex doesn’t want an ordinary pet, he wants a dinosaur.
Sharmat, Marjorie Weinman – Tiffany Dino Works Out – Unhappy with her size, Tiffany Dino tries a variety of activities with her
friends in order to lose weight.
Shields, Carol Diggory – Saturday Night at the Dinosaur Stomp – When it’s rock ‘n’ roll time in the prehistoric era, many kinds of
dinosaurs gather to twist and tromp.
Steinberg, Laya – Thesaurus Rex – Thesaurus Rex is a playful young dinosaur with a way with words. He especially likes trying out
synonyms as he plays all day.
Stevenson, James – The Most Amazing Dinosaur – Wilfred the rat stumbles into a museum, where he befriends the animals living
there and enjoys the many exhibits.
Sis, Peter – Dinosaur! – While in the bath, a boy is joined by all sorts of dinosaurs.
Wahl, Jan – I Met a Dinosaur – After a visit to a museum of natural history, a young girl begins to see dinosaurs everywhere.
Whybrow, Ian – Sammy and the Dinosaurs – Sammy finds toy dinosaurs in the attic that come to life when he names each one.
Willems, Mo- Edwina, the Dinosaur Who Didn’t Know She Was Extinct – Everyone in town loves Edwina the dinosaur except one
little boy who is determined to prove to everyone, including Edwina, that dinosaurs are extinct.
Wilson, Karma – Dinos on the Go! – Dinosaurs ride everything from bicycles to airplanes as they travel around the world.
Yolen, Jane – How Do Dinosaurs Say Goodnight? – Mother and child ponder the ways dinosaurs can say goodnight, from slamming
tails to giving big hugs. (S)
Jxxx – Beginning Readers
Hoff, Syd – Danny and the Dinosaur – A little boy is surprised and pleased when one of the dinosaurs from the museum agrees to play
with him. (S)
Most, Bernard – Catch Me If You Can – When a little dinosaur plays a game with the biggest dinosaur of them all, she is not scared
because he is her grandpa.
Skofield, James – Detective Dinosaur – Lost and Found – Detective Dinosaur and Officer Pterodactyl find a missing baby and a home
for Cadet Kitty.
Weston, Martha – The Dinosaurs Meet Dr. Clock – Dr. Clock invents a time machine, but his trip back to the era of the dinosaurs
does not turn out as he had expected.
JF – Juvenile Fiction
Adler, David A. – Bones and the Dinosaur Mystery – Young Detective Jeffrey Bones investigates the disappearance of the plastic dinosaur his grandfather just bought for him in a museum gift shop.
Arnosky, Jim – Little Champ – Bobby and Gina visit their grandparents on Lake Champlain and learn about the legendary monster that supposedly inhabits the lake.
Byars, Betsy – Boo’s Dinosaur – When young Boo is followed home by a dinosaur that only she can see, it causes a bit of trouble for her older brother, Sammy.
Butterworth, Oliver – The Enormous Egg – When Nate hatches the biggest hen’s egg he has ever seen, no one is prepared for what comes out!
Griffith, Helen – Dinosaur Habitat – After finding a dinosaur fossil, two brothers are suddenly transported into a misty world where Ryan’s toy dinosaurs are alive. 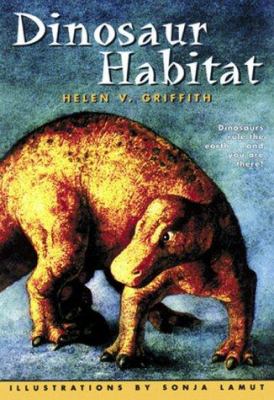 Gurney, James – Dinotopia: A Land Apart from Time – Shipwrecked, a professor and his son find themselves washed up on an island where people and dinosaurs live.
Hoban, Russell – Trouble on Thunder Mountain – When their mountain is flattened to put up a theme park, the O’Saurus’ use faith and Monsta-Gloo to put things right.
O’Malley, Kevin – Captain Raptor and the Moon Mystery – When something lands on one of the moons of the planet Jurassica, Captain Raptor and his spaceship crew go to investigate.
Osborne, Mary Pope – Dinosaurs Before Dark – Eight-year-old Jack and his younger sister Annie find a magic treehouse, which whisks them back to an ancient time zone where they see live dinosaurs.
Yager, Fred – REX: a Novel – A boy must feed and hide a baby Tyrannosaurus rex in New York City while waiting to see if his parents will return from their latest dig alive and while dodging a professor who wants to sell Rex to the highest bidder.
JNF – Juvenile Nonfiction
Most of the dinosaur books are found in J 567 – J 568, but here are some miscellaneous others for you to enjoy:
J513 MUR – Dinosaur Deals (Stuart J. Murphy) – Mike and his brother, Andy, go to a trading fair in hopes of finding a Tyrannosaurus rex card.
J743.6 EMB – Dinosaurs! : A Drawing Book (Michael Emberley) – This book presents instructions for drawing a variety of dinosaurs.
J745.5 ROS – Crafts for Kids Who Are Wild About Dinosaurs (Kathy Ross) – This book provides instructions for twenty projects, including a triceratops ring-toss game, diplodocus body puppet, plesiosaur window decoration, and more.
J808.882 STE – Tyrannosaurus Wrecks: a Book of Dinosaur Riddles (Noelle Sterne) – This book is a collection of riddles about dinosaurs including “How does a dinosaur send a letter? Fierce class” and many more.
J811 MOS – Bone Poems (Jeffrey Moss) – This offering is a collection of poems about dinosaurs, Ice Age mammals, prehistoric people, and other ancient creatures.
J811 WIS – Dinosaurs Forever (William Wise) – This collection of humorous poems about dinosaurs has funny illustrations, too!
J818 HAL – Dino Riddles (Katy Hall) – This collection of riddles relates to dinosaurs, such as “What do you get if you cross a dinosaur with a rabbit? Tricerahops!” and “What did dinosaur campers cook over the fire? Dino-s’mores!”
2/07
Sewickley Public Library of the Quaker Valley School District